Traipsing through the countryside to the North East

Hamhung, almost a million people and the 2nd or 3rd city in North Korea, is a large industrial urban center. It has had very contact contact with the outside world so far.

For me its significance lies in its recent opening to tourism: Why now, and not earlier? Is something hiding in Hamhung? How does being the gateway of the north shape the way it is today? Is it a chemical weapons manufacturing centre?

I will attend to answer these questions with this and the next few posts.

I found a bland, blank city, with two redeeming values:
(1) I was able to make spontaneous contact with a group of children on Kim Il Song Square and
(2) Getting there was a most interesting five-hour drive each way spent driving on dusty cart tracks looping around the countryside.

While I do have pictures of the nice encounter with the children (see the post “Children of North Korea – 4”, for example), I have most unfortunately none of the drive. Suffice it to say that this drive was in unchartered territory, quite literally since there wasn’t a road and nary an ox cart trail at times. As you can imagine, my awareness level was at an all time high during these hours spent traipsing through the fields to get to Hamhung. We were going through places where people looked different (poorer but not hungry, it seemed to me), where all work was done by hand, including pulling heavy carts and felling trees, where few tourist or NGO cars had been before (the army was at a complete loss about what to do with us at checkpoints), and where the rules were a little different (we saw people doing small trade, such as selling individual cigarettes or candy).

And also as you can expect, pictures during this epic drive were a no-no-no.

Somewhere between Wonsan and Hamhung is a road to Yodok, the largest labor camp in the country. We crossed that road (a dust track?) for sure, but no one told me when we did.

The entire region was closed again to tourism immediately after our car left. “The road is too bad”. Period. 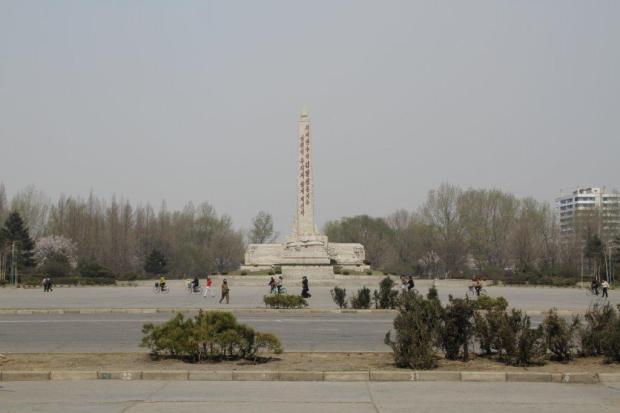 ← Reality
The tourism highlight of Hamhung →